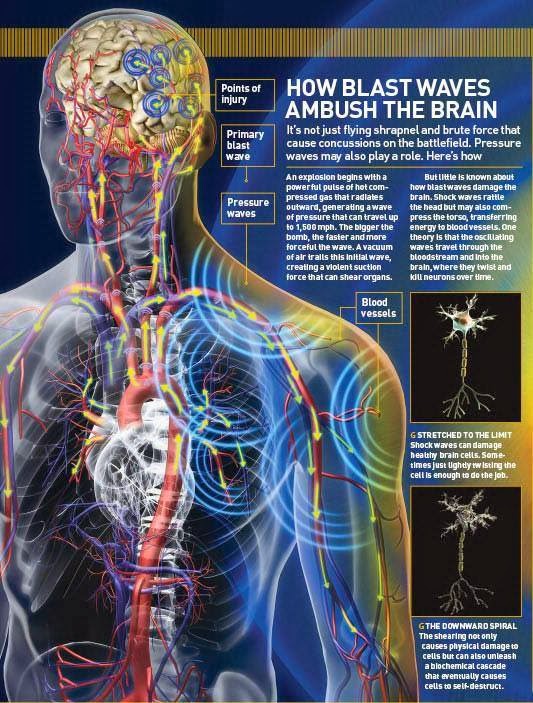 I have Traumatic Brain Injury relative to Post-Concussive Syndrome … Blah, blah, blah … Basically, I got blow’d up.

It goes like this: BIG WHITE FLASH from know-where while simultaneously feeling HIT hard in the nose, throat, gut and nuts all at the same time. Breath taking really because its instant but really slow too, “lights out” moment that you are unaware of simply occurs, then a “WTF” feeling like no-other, followed by a “God sent me back to my body in a flash” rush mixed with “did that just happen and is my body intact”.

It was not scary; it happened too fast to feel any emotions. After that I was definitely more fearless. I knew what it felt like to be dead. It was a fearless sensation of simply no sensation at all. I’ve never been the same and my life before the blast seems like somebody else’s life. In a way, it was the birth of who I am now. That explosion was my *road to Damascus.

So to recap it goes like this:
1. BIG WHITE FLASH – HARD HIT
2. lights out
3. Suddenly…. Zap
4. “WTF …. did God just send me back to my body, wow … did that just really happen.”
What happens next depends on how f*ed up you are but for a flash it’s as good as being dead. I felt like I had died.

I wasn’t bleeding other than a tad from the nose and I was able to drive on. I wasn’t in a vehicle, no helmet and it wasn’t a large mortar but it was close enough to ring my bell.

I didn’t know about blast wave injuries. Soon after I experienced symptoms that were primarily memory and sleep related with headaches, neck pain and poor balance. I even fell off a platform while on a raid and f*ed up my head again. Life became harder and I gradually felt worse.

At Walter Reed they kept asking about IED’s and I said no. At that time “Roadside Bombs” were just all the rage with those silly fellas trying to kill us in Iraq. IEDs got a lot of air-time at home so I think a lot of folks assumed all blasts were IEDs.

They kept asking and I said no; then finally they said I didn’t remember it. I called my team and asked if we took an IED blast and we hadn’t.

I was getting worse and couldn’t remember s*** accept from what I had in my notes and they sent me to a poly-trauma unit in Tampa.

I thought my injury was from the fall until I was asked specifically about being near any “mortar blasts” and I answered, “Yes, but only one got close”. And there it was. The doctors pressed the issue because I displayed a blast-wave injury. Truthfully, as I write this I should be more thankful the Docs didn’t give up and less bitter about how long it took.

I felt so dumb for not correlating an IED and a Mortar both were categorized as; blasts. However, that was also part of my injury. The question needed to be very specific to find the answer in my brain. Again, symptom of my blast wave injury. I call it “indexing”. If I don’t get the right stimulus; I’m frozen inside and nothing exists in my memory. I’m always planning. If I don’t need the memory to complete a plan or mission, it doesn’t exist.

Here comes some intellectual s*** so pay attention and answer the questions for yourself. The “BIG WHITE FLASH” moment I described, I later found out was caused by how a blast wave isn’t repelled my the human skull and it damages the brain. It zero’s you out in some ways, like turning off a computer.

The “back in my body” sensation was the reboot. The computer is working but the hard-drive struggles. Blast waves tear the s*** that connects s*** to other s*** in the human brain.

Imagine how f*ed the reception of a radio would be if all the wires inside were instantly corroded but not completely broken. No damage to the outside but now you find yourself being creative with coat hangers to try and improve the signal.

QUESTION: What if the reboot doesn’t boot up everything and there’s a glitch?

We know the brain finds ways to learn what it needs by re-attaching neuro-pathways and brain s*** gets re-wired.

Those with TBI / PTSD combination seem to have more intensified PTSD symptoms than those without TBI.

Having PTSD and no TBI seem to have less-intensive agoraphobic behavior in the civilian environment. Same frustration in public; hell yes, but less barricading at home.

I also recall having concussions in the civilian environment from being; lets say, “various forms of an Irish ego”. I don’t recall a re-boot like I did from TBI caused by a blast wave injury while in war. Maybe concussions occur in various degrees of severity. Getting a bump on the head is different than the mechanism of a blast.

According to Wikipedia regarding blast waves, “High-order explosives produce a supersonic overpressure wave ….. A blast wave generated by an explosion starts with a single pulse of increased air pressure, lasting a few milliseconds. The negative pressure (suction) of the blast wave follows immediately after the positive wave”. Well, that explains a lot; supersonic overpressure followed by supersonic suction in milliseconds. Like I stated earlier,”Blast waves tear the s*** that connects s*** to other s*** in the human brain”.

Here is my theory; when our brains rewire themselves during combat, our drive paths per se, become what it took to survive, complete missions and protect one another in a wartime situation. It’s intense and the other behavior important to a civilian environment gets wiped out. All priorities from combat norms become the overall norm.

This explains why those with single diagnosis of PTSD can cope better outside the house in a civilian environment and are less agoraphobic. They haven’t had to relearn the “how” part. TBI requires re-learning.

I stayed in-country for a long time after my injury. Months and months of missions. Is my brain now hard-wired to think as I lived in Sadr City?

Is my human brain the product of the Military Decision Making Process now?

If you went through something similar, does this help explain other things?

* road to Damascus:
(idiomatic) An important point in someone’s life where a great change, or reversal, of ideas or beliefs occurs.

**I’m just a guy trying to figure it all out and I believe we can if we work as a team.

As a side-note, add Mef Tox to TBI / PTSD and symptoms intensify yet again.