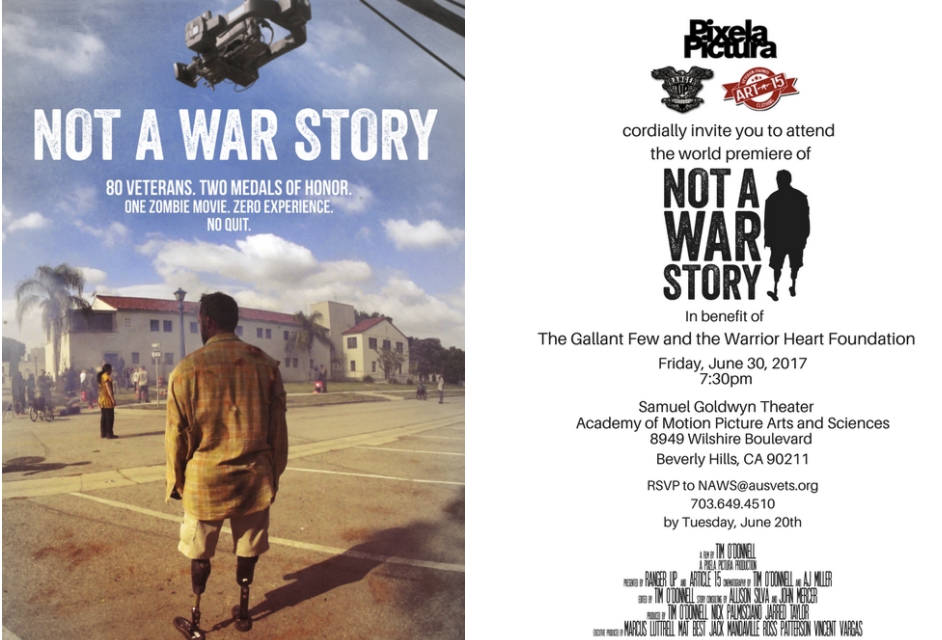 Not A War Story To Fill Samuel Goldwyn Theater

GallantFew is insanely honored that RangerUp chose GallantFew as a donation recipient of their  ‘Not a War Story’ documentary world premiere.  Equally exciting is the opportunity to help RangerUp  pack the 1,012 seat world-class Samuel Goldwyn Theater with Veterans.  Buy tickets to personally attend through this link or sponsor Veteran tickets here.

Not A War Story is a feature length documentary about the military veteran community, their aspirations and the craft involved in the making of Range 15, an independent narrative film that is produced by military veterans.  To the casual observer, Range 15 appears to be nothing more than a bawdy, slapstick satire of Hollywood zombie apocalypse and military films. However, to those serving in the armed forces, the film is rife with inside jokes and jargon, and perhaps a resounding reclamation of Hollywood portrayal of military life and community.

Starring Hollywood actors and Medal of Honor recipients alike, Not A War Story, offers an inside look to why being a part of Range 15 was so much more than zombies and gore, and through community support inadvertently became the most decorated movie in history (2 Medals of Honor, 1 Navy Cross, 2 Silver Stars, Over 30 Bronze Stars and Purple Hearts). This is a film whose back-story includes a lot of heart and a lot of heroes.

GallantFew boldly supports and coaches Veterans through five core functions of response-ability.  Here you can learn more about the GallantFew’s functional fitness theory. One core function is the importance of social fitness.  Are you asking yourself how filling Samuel Goldwyn Theater applies to social fitness?  Let us better explain.

There are countless paths a person can take to show and grow personal social fitness.  Growth can be through enhancing a social network.  It can be by committing to a higher engagement level when in public.  Honestly, the list can be endless.

The making of Range 15 was a phenomenal exhibit of social fitness.  Let us show you how:

By filling the Samuel Goldwyn Theater with Veterans the following can and will happen:

This opportunity is for everyone

As we mentioned above, proceeds from Not a War Story ticket sales will go to GallantFew. Equally awesome is that Article 15 chose our friends at Warriors Heart as the other charitable recipient. Warriors Heart provides private treatment to adult men and women 18 and older who are seeking inpatient treatment for chemical dependency, alcohol abuse, and co-occurring psychological disorders relating to PTSD (post-traumatic stress disorder)or the psychological effects of MTBI (mild traumatic brain injury).

Can’t make it to Hollywood, but want to make sure we pack the theater with Veterans? No worries!  RangerUp and Article 15 are putting together a list of Veterans now. So purchase your ‘Sponsor a Veteran’ ticket here and they will make sure we have a hero in a seat thanks to you.

Just can’t go, but want to find a way to support the effort?  You can always make a direct donation to GallantFew.   You can also check out some of our favorite a swag:

Get your own Range 15 poster or pick up some cool gear.  You can always swing over to the GallantFew store and see if there is anything for you there.