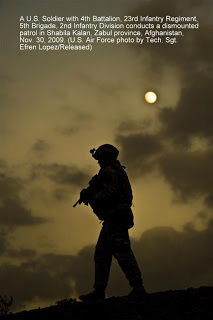 As our military marches towards the tenth anniversary of the attacks of September 11th, the general public shops on – unaware of the magnitude of sacrifice by a brave few.

The US Census just released US population figures of 309 million, and a scant 2.3 million of the population are military veterans.  The Census also estimates that less than 200,000 are post-9/11 veterans, and about 150,000 remain deployed in Iraq and Afghanistan.

From 21% in WWII to about 1% fighting terrorism today.  A very heavy load carried by a very small few for a largely unaware population.

During this Christmas season, remember the ongoing sacrifices.  Keep these brave soldiers, sailors, airmen,  Marines, Coast Guardsmen and all the other unseen and unsung in your prayers – and remember their families, too carry a heavy burden.

Happy New Year – one that will mark ten continuous years of conflict.