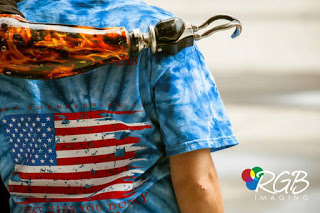 I’ve been giving some thought lately to why some people deal with the worst possible thing that could happen to them – multiple amputations, horrifying burns and scars, death of friends – yet meet each day with a smile on their lips and a pep in their step, and other people who don’t have a fraction of these challenges seem barely able to go on.

Seems to me there is a split second opportunity in a human being to choose his or her response to every single thing that comes at them, every second of the day.  The very thing that most separates us from the animals is that we have the ability to control our reaction to things – we have “response-ability”.

But still what is it that makes one able to choose their response?  Is it something that is innate, natural, either you have it or you don’t, or is it something you can learn, develop, refine?

I believe it’s both.  I believe that a person’s ability to choose his or her own response to a situation is hard-wired into our very beings, and further that if one doesn’t exercise that ability to choose a response to a situation then that response-ability becomes less effective.  Practice it more, it becomes easier and more effective.  Always assuming the worst, is in a way practicing choosing that response.  Eventually you’ll come to believe the whole world is out to get you.

A quick example, and one I think I read in a Stephen Covey book long ago (I searched for this example online but failed to find it, so I’m paraphrasing from memory).  He gave the example of a man, sitting in a restaurant, with a couple of kids running around amok.  They were terrorizing the other diners, spilling drinks and making the entire atmosphere unpleasant.  Covey said he got the man’s attention and said “Sir, excuse me, but would you do something about your children?  They are ruining everyone’s meal”.  The man looked up and then at his kids as if he just saw them for the first time.  He said “Oh, I’m so sorry – you see we just came from the hospital where the doctor told us their mother would die soon and I guess I’m not sure what to do next”.  Covey’s attitude went from “you jerk, control your worthless kids” to “what can I do to help you”.

So how to exercise this response-ability muscle?  One way is to see a situation and then imagine several different reasons behind why the situation is as it is.  Then pick a reason that doesn’t upset you and go with that until you learn otherwise.

Here’s a simple example.  The next time someone is driving too slowly in front of you, instead of getting irritated at the idiot who should NOT be on the road and in your way, imagine it’s a new teenage driver, being extra careful.  You don’t know what the real situation is, but your reaction to that situation is entirely different (or should be – if it’s not we should talk).

Give it a try.  I suspect your blood pressure will go down a few notches, and you might not damage or even ruin a treasured relationship.