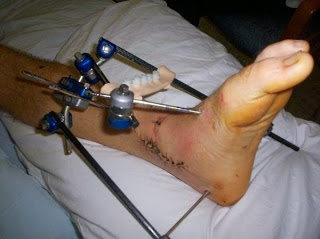 Giving up is an easy task, taking the easy way out may not always be the right decision.. I learned that quickly when I took my first steps after I was injured. Doctors told me I would never walk or run again. They basically said I will always be in a wheelchair or on crutches. If anyone knows anything about me, I will never quit. When someone tells me that I can not do something, its game on. I will do whatever you think I can not. I will do just about anything in my power to overcome the doubted. . This competitive nature is something I adopted well before the military. The military only made me more of a competitor. This competitive spirit is the spirit of the united states infantry. This spirit will never be broken.

After spending 1 month in ICU and 1 month on the 5th floor of Walter Reed Army Medical Center I was ready to go home. Days here were long, it started off with a nurse taking blood from my arm at 0500. Then I would go to physical therapy followed by occupational therapy. By breakfast time I was tired and ready to take a nap. I had lost nearly 40 pounds in 2 weeks. I felt very weak and was easily tired. My mom and any other visitor had to wear a mask, rubber gloves, and be covered in a weird looking yellow gown. I was very prone to infection because my immune system was so weak. I had lost a lot of blood and fought off a fairly large infection. My ankle had contracted an ugly infection and I nearly lost my foot a second time.. But my body kept fighting back.

I usually bathed in the morning before I went to PT. My mom had the great task of giving me a sponge bath. It was frustrating not being able to take care of myself. I went from running, jumping out of planes, and fighting terrorists to being in a bed most of the day and wheeled around in a wheel chair. I managed to stay positive and was constantly reminded of how lucky I was to be alive. Afternoons were spent hanging out on the floor with other injured guys. There were men and women missing legs, parts of their skulls, blinded and deaf from traumatic events during combat. We all had something in common; we had a spirit that few possess,that spirit helped us all to overcome what we had been faced with. The moments I spent with other injured veterans were humbling and very inspirational. I came to the conclusion that someone always has it worse and dwelling on the negative will never get you anywhere.
Evenings at Walter Reed were spent watching television, playing cards, and talking with visitors. Some visitors were famous individuals from NBA All Stars to Presidents of different countries. I could always tell when someone very important was coming because trained working dogs came to sniff the place out and guys wearing suits came in blocking off floors and were posted at doorways. The president of Afghanistan came in one evening to pay a visit to some of the veterans. My roommate was an above the elbow amputee from a an RPG blast. He was hilarious. He was not very fond of President Karzai and gave him a few words of what he thought about the situation going on in Afghanistan.  It was very entertaining.

Night time at Walter Reed was a little somber. My roommate would wake me up by screaming that his arm was hurting. I would call the nurse and they would have to remind him that his arm wasn’t there. What he was experiencing was phantom pain from losing a limb. I used the quiet time to reflect back on my life events which helped me process the situation I was in.   They then put an ex-fixator on my ankle to keep my bones in place so that it would heal properly. Every day I had to use a wrench to tighten a nut that was screwed into my tibia and fibula. It was incredibly painful.

After I was medically retired in 2008 I wanted to move closer to my family. So I moved back to Wichita, Kansas. But Wichita, Kansas was not the same as when I left. My friends were either still in college,  moved away or married with a family. My community had no idea that I was coming home and essentially I felt abandon. This problem seemed to perpetuate after a few years of being home. My network of friends in the military had virtually disappeared and struggling without them was not something I was used to. I tried to lean on a few friends and family but felt I was being a charity case. Society just added to the problem. I often was questioned about how it felt to take a life? Why did I serve during a time of war? I felt the wrath of being a combat veteran. All the VA could offer me was a heavy prescription medication that made me feel like I was on a different planet.

This is a picture of my ankle with the external fixator.