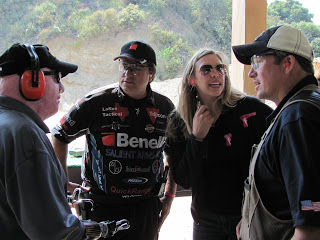 GallantFew participated in several events over the past week.  Mike Schlitz and Karl Monger were interviewed by Bill Whittle on Afterburner.  As soon as the interview is available we will post it here.  A year ago Bill interviewed Mike Schlitz on the Veterans Airlift Command.  Take six minutes and watch this.

We also were honored to be included in the nonprofits benefiting from the Hollywood Celebrity Sporting Clays Invitational.  This was a great event, and we have some great video and pictures of celebrities supporting veterans and GallantFew.  We’ll get them posted once we sort through and clip the video for uploading.

Boone Cutler, author and Veteran Rights Leader, hosted The New American Veteran Show on June 9, 2011. The show featured the first ever on-air interview with Department of Veteran Affairs Representatives regarding the new Caregiver Program implemented this year through the VA specifically for Combat Veterans from the current wars. This new program offers monetary and health insurance benefits to any person an injured Warfighter selects as a caregiver.  The second half of the show featured author / Warfighter Anthony Farina who discussed the creation of his upcoming movie based on events in Sadr City during the war in Iraq. Together they discussed the proactive effects that Warfighters are making on our society and on behalf of fellow Warfighters.  Make sure you listen to the interview, and remember you can subscribe to a free download of this podcast through iTunes.

This week at 1:00PM Central, Karl will interview Ranger veteran Steve Robinson, Vice President of External Veterans Affairs for Prudential Financial.  Steve is very involved in resolving veteran unemployment issues and participates at the highest levels of our government to identify methods to increase veteran employment and reduce suicide and homelessness.  Listen in!

Looking ahead to next week, our guest is Hollywood actor and Ranger veteran Tim Abell.  Tim is the host of Grateful Nation which kicks off its next season on July 3rd on the Outdoor Channel.  Check your listings, set your DVR!

A stark reminder of reality:  Just received notice that SSG Jeremy Katzenberger, 1st Ranger Battalion, was killed in action 14 June.  He leaves behind a wife and baby, and Ranger brothers that will miss him more than words can express.  GallantFew is here for each of you once you leave the military.  Last week I met a Special Operations veteran who was injured in a “small” explosion.  This ultra-professional, at the peak of his profession, outwardly appeared to have no injuries.  He told me that due to the nature of his injuries, he can no longer sky-dive, no longer SCUBA dive.  Everything that he has trained his entire career to do has now been snatched from him in a white-hot flash.  “What do I do know?” he said.  It’s up to us – the SOF veterans that have made our way in the civilian world to reach out and help these brothers transition back safely, peacefully, successfully.

If you want to help us, visit www.gallantfew.org and sign up to volunteer or donate to help us in our mission.  Be one of our 100 Founding Donors – the first 100 to donate $1,000 will receive a nice polo with GallantFew logo, a plaque and will be listed on our website as a Founder.  Join Robbi Schlitz, Bill Cooper, Alan McNiel, Charles DeRosa and more!