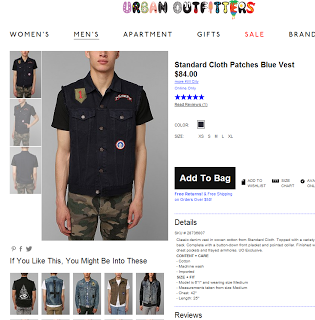 Today forwarded to me by three different folks was this blog posting, written by Guardian of Valor.  The summary is that Urban Outfitters has decided to offer clothing with military patches, especially of note is the distinctive red, white and black 3rd Ranger Battalion scroll.

I think it’s important that as many people as possible see this response, directed to Urban Outfitters and written by Gold Star Sister Cindy D.

“I do not think that I have ever written to a company asking for an article of their clothing to be removed from their stores, but today I did so. Urban Outfitters has a line of jackets called Kill City and one of those jackets has the Ranger scroll on it. It bothered me that they are using the Ranger name to sell clothing – especially since the line of jackets of which this is a part is Kill City. I wrote the following email to them. If this bothers you as well, I encourage you to let the company know.

I am writing quite concerned about your apparel. I understand making your clothing appeal to youth and trying to make it look cool. Unfortunately, by using the Ranger scroll Urban Outfitters is denigrating that very group. You make common a patch that is not for the common. Becoming a Ranger takes a strength and courage that should be held in high esteem instead of trivialized in order to sell clothing.

A young man dreamed of becoming an Army Ranger. He wanted it more than anything else and he enlisted in the Army. This young man went to Ranger training at Ft. Benning, Georgia and showed the intestinal fortitude and mental toughness required to complete the grueling training . His parents witnessed his graduation into this elite group of our nation’s toughest soldiers. Then the unthinkable happened – our nation was attacked on September 11th. The Rangers immediately made preparations to seek out the cowards responsible for the attacks. This young man’s Ranger Battalion was deployed to Afghanistan and he spent his 21st birthday in the mountains of Afghanistan. In the early morning hours of March 4, 2002 a Navy Seal fell out of a helicopter and was captured. A special operations unit was sent in. The men were greatly outnumbered by the enemy forces entrenched in rock fortresses on the mountain. Through the heroic actions of the special operations unit, the enemy was defeated. That day, seven men became our country’s first combat fatalities in Afghanistan including the young Ranger, my step-brother, CPL Matthew Commons. Like the many who fell before these men and the many Rangers who will someday make the ultimate sacrifice for our country, they do so willingly because as Rangers they have put their nation before self according to the Ranger Creed.

Recognizing that I volunteered as a Ranger, fully knowing the hazards of my chosen profession, I will always endeavor to uphold the prestige, honor, and high esprit de corps of my Ranger Regiment.

Acknowledging the fact that a Ranger is a more elite Soldier who arrives at the cutting edge of battle by land, sea, or air, I accept the fact that as a Ranger my country expects me to move further, faster, and fight harder than any other soldier.

Never shall I fail my comrades I will always keep myself mentally alert, physically strong, and morally straight and I will shoulder more than my share of the task whatever it may be, one hundred percent and then some.

Gallantly will I show the world that I am a specially selected and well trained Soldier. My courtesy to superior officers, neatness of dress, and care of equipment shall set the example for others to follow.

Energetically will I meet the enemies of my country. I shall defeat them on the field of battle for I am better trained and will fight with all my might. Surrender is not a Ranger word. I will never leave a fallen comrade to fall into the hands of the enemy and under no circumstances will I ever embarrass my country.

Readily will I display the intestinal fortitude required to fight on to the Ranger objective and complete the mission, though I be the lone survivor.

I feel very strongly that we as a country show our service members the respect and honor they deserve. This is not done by using the name of the elite Army Rangers to sell clothing. I would like this vest to be pulled from inventory. Additionally, I ask that your company show respect for the Rangers by making a donation to GallantFew, a 501(C)3 charity founded by an Army Ranger with the mission to reduce US Army Ranger veteran unemployment, homelessness and eliminate Ranger veteran suicide by a unique program of one-on-one mentoring by a Ranger veteran, now successful in civilian business, with a Ranger veteran just departed active duty.”

Cindy also competed in the Pike’s Peak Marathon last month in honor of her step-brother.

If you want to lend your voice to Urban Outfitters, you can contact them here.  Please keep your comments calm and respectful.

Before I even had a chance to post this, I received a message that the vest has been removed from Urban Outfitters.  This is what you see when you go to the page now. 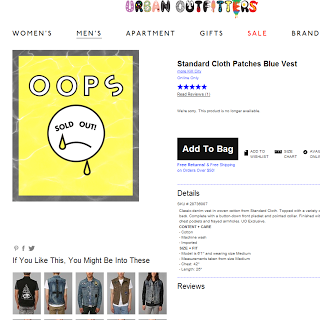