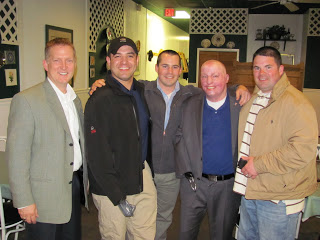 Tweet
Share
Share
Pin
0 Shares
Today’s guests on GallantFew’s The New American Veteran were Rick Kell, co-founder of Troops First Foundation and actor DB Sweeney, who with Cuba Gooding, Jr started the website “Letters from Hollywood”.
The Troops First Foundation develops, operates and supports a synergistic group of wellness, quality of life and sports-based initiatives in support of today’s military personnel.  I first met Rick Kell in the DC area where I was invited to tag along and have pizza with some wounded soldiers.  Rick takes a group of wounded from Walter Reed to dinner once a week – gets them out of the hospital environment and gives them a safe place to relax and have some comradery.  I was fortunate to also meet SFC Leroy Petry (MOH) at this one.

Troops First Foundation also has a phenomenal program called Operation Proper Exit.  The first time a wounded soldier leaves Iraq or Afghanistan they are usually carried out.  Operation Proper Exit gives that soldier the opportunity to return to the area where they were wounded, talk to the soldiers currently deployed there, and see the impact our presence (and their service) has on the locals.  Then this time they walk out of theater on their own initiative – their own way – Operation Proper Exit.  It is a tremendous healing event for each and every participant.
Troops First Foundation is a nonprofit, and they have their first major fund-raising event coming up later this year.  The call was getting scrambled as Rick closed out, as soon as he emails me the information on that event I will post it here and in the other forums. 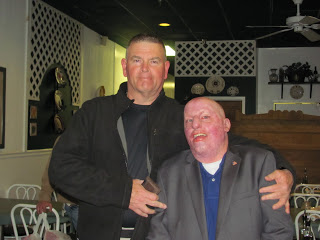 Rick Kell and Ranger Schlitz (being goofy)
This is an organization you should support.  Visit their website and drop them a donation.
Actor DB Sweeney has been in a ton of movies and TV, additionally he does voiceover work for the Oprah Winfrey Network and many commercials.  He referred to himself on the show as a “household face but not a household name”.  DB’s work includes television series The Edge of Night and Spenser: For Hire,  films Gardens of Stone, Eight Men Out, The Cutting Edge, and in Lonesome Dove. DB Sweeney in Iraq
What really sets DB apart though is his respect for the military and our veterans and the fact that he acts accordingly.  DB helped found A proud supporter of the US military, Sweeney founded a website Letters from Hollywood to get messages of support to active duty and retired military. The site already features letters from celebrities like Tim Abell, Bonnie-Jill Laflin, Cuba Gooding Jr and many others.  DB is reaching out to celebrities from entertainment, sports, politics – and has a goal of releasing a new Letter from Hollywood every Wednesday.
He has made multiple visits to the Middle East and Europe to visit Service Men and Women. On May 4, 2008, Sweeney flew with the helicopter squadron HMM-364, “The World Famous Purple Foxes”, in a CH-46E while in Iraq visiting with service members and promoting his new film, Two Tickets to Paradise.  There is a great story behind Two Tickets to Paradise, as DB wanted to take some of his films overseas to show to the troops when he visited but he ran into roadblocks with the owner/producers of those films.  So DB decided to produce his own film so he could show it to whoever/whenever he pleased – the result was Two Tickets to Paradise.  Now because he made this movie “out of the mainstream” it has not received the attention that would drive viewers – so lets help with that!  I just moved it to the top of my Netflix list.
T10RR:  The Top 10 Ranger Referral program is growing.  We are looking for more Rangers that are employed at large companies and willing to be the job opportunity/referral point of contact.  Email ranger@gallantfew.org or cderosa@gallantfew.org for more information.
The Marine Corps Times announced this week that the President of the United States will award Dakota Meyer the Medal of Honor for actions in Afghanistan.  We stand in awe and salute Dakota Meyer – thank you for your service, you are a true hero.  Articles about Dakota here:  Politico; Adair Progress;  Austin American Statesman.  Read the Marine Corps Times article and watch the video.
Ranger Rendezvous is upon us – the 75th Ranger Regiment’s Time on Target is 1620 local, Fryar Drop Zone on Monday.  If you’re in the AO, look for GallantFew.
We continue to drive on towards our goal of raising $111,111 by 11/11/11 and we thank our newest Founding Donor (first 100 to give $1000) Ranger veteran and combat medic Eric Waters!  To donate visit our site or if you prefer, send a check to GallantFew, Inc, 6505 E. Central #205, Wichita KS 67206.  Any donation you make is tax deductible.
Oh, yeah – go listen to the interview here!
Listen to internet radio with GallantFew on Blog Talk Radio
See you on the DZ.
RLTW  Karl
Tweet
Share
Share
Pin
0 Shares