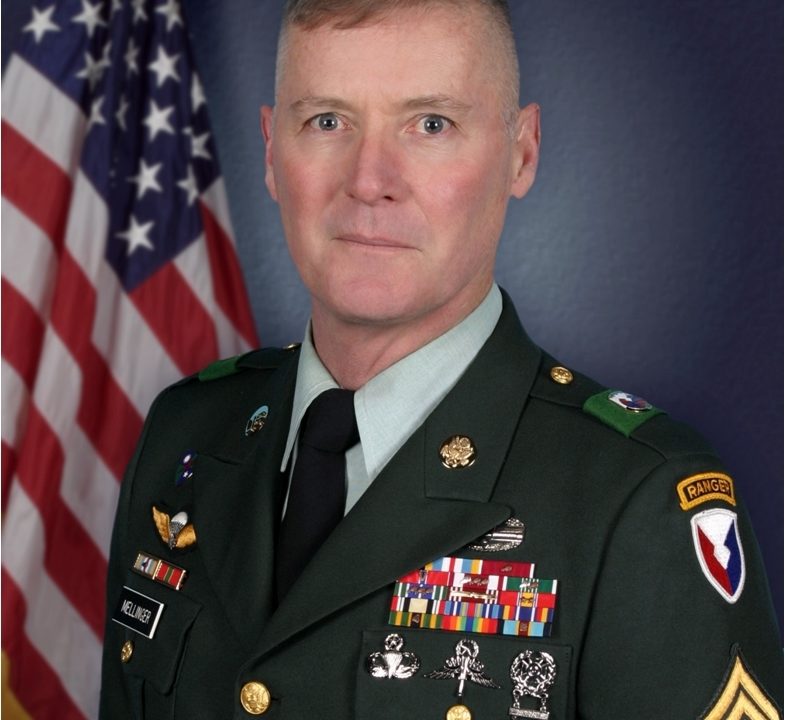 GallantFew board member, CSM (Ret) Jeff Mellinger, stands tall as he joins 14 men inducted into the Ranger Hall of Fame Thursday, July 14, in a ceremony at Fort Benning, Georgia.

CSM Mellinger was drafted on April 18, 1972, at Eugene, Oregon and is widely known as the “last Vietnam draftee” upon his retirement in 2011. Mellinger spent a total of 33 months in Iraq and endured 27 roadside bombings, including two that destroyed his vehicle. Mellinger escaped all without injury. He has more than 33 hours of accumulated freefall in more than 3,700 jumps, and is a
FAA Master Parachute Rigger.

The Ranger Hall of Fame is held annually in July at Fort Benning, Georgia. The Ranger Hall of Fame was formed to honor and preserve the spirit and contributions of America’s most extraordinary Rangers. Inductees are selected impartially from Ranger units and associations representing each era or Ranger history.

Each Ranger Hall of Fame nominee is subjected to the scrutiny of the Selection Board to ensure the most extraordinary contributions are acknowledged. A complete archive of nominees and their biographical information can be found at the Ranger Training Brigade Ranger Hall of Fame website.

Mellinger serves selflessly on the Gallant Few board of directors as well as contributing to many other community organizations. CSM Mellinger is a member of the National Society of Sons of the American Revolution, a Distinguished Member of the 75th Ranger Regiment, and has been presented the Order of Saint Maurice (Primicerius), the Order of the Combat Spur and the Honorable Order of Saint Barbara.