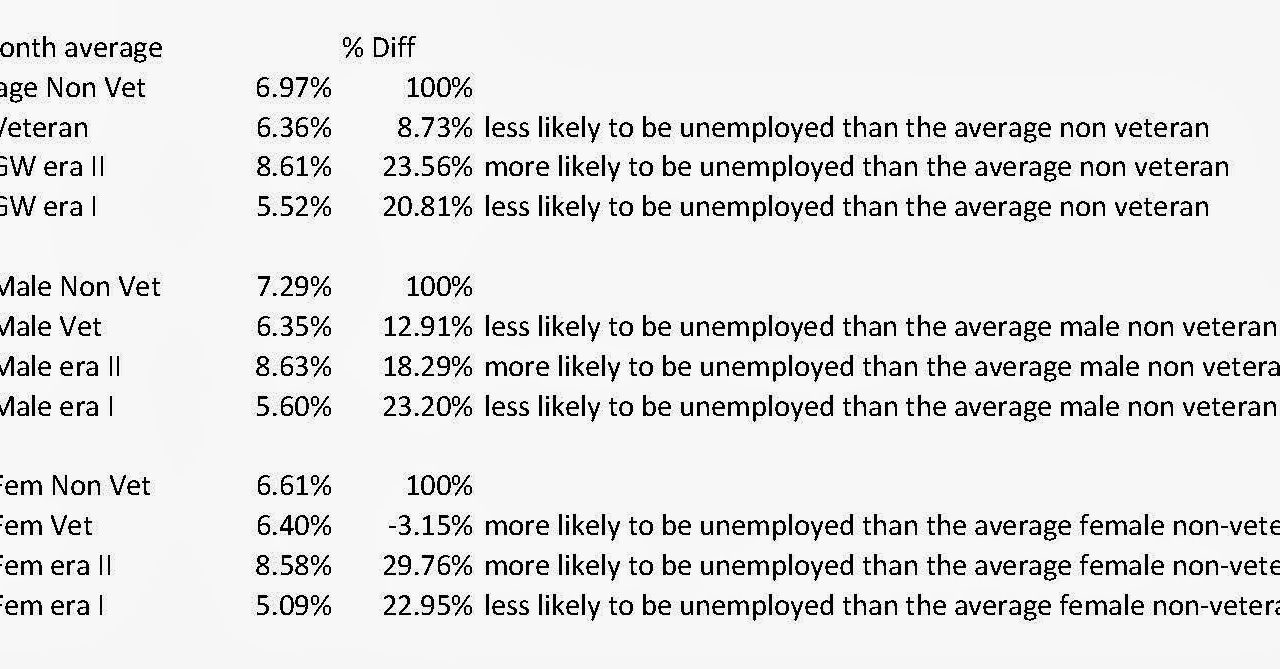 “Although the month-to-month unemployment rate for Veterans continues to fluctuate, Veteran unemployment is still trending downward.”

“…we see unemployment is 9.1 percent which, while up from January’s 7.9 percent, is still among the lowest in more than three years.  If you compare these data points over the past few years, you can see the downward trend for Veterans unemployment is continuing.”

You can see their charts here.

Every month since January 2011 I’ve been capturing numbers from the Department of Labor Veteran Statistics Report. It comes out monthly and has numbers broken down by eras.  Anyone can look at it and draw their own conclusion.  My conclusion is a bit different than the rosy picture the VA paints.  Here are the headlines from the last three month VAntage Point blog on Veteran unemployment:

But……….here’s the part that doesn’t get the attention it should.  A Gulf War II (post 9/11) Veteran is 24% more likely to be unemployed than a non-Vet over a twelve month average and in February that went up one point to 25% more likely unemployed than someone who never served.

Further ugliness, a female Gulf War II Veteran is 30% more likely to be unemployed than a female non-Vet.

When you compare eras in the numbers provided by the Dept of Labor, it becomes very apparent than our newest Veterans – many of whom volunteered to go to war AFTER 9/11, knowing we were a country at war – are facing the greatest employment challenges when they return home.

We can put all the nice wrappers around the statistics we want – but that kid returning to Dallas, Kansas City, Seattle – that kid is facing isolation, a government-endorsed PTSD treatment program that in my opinion makes PTSD worse in a Veteran, not better and many of them are dying as a result.

General Wayne Downing (God rest his soul) used to say he had a simple cure for PTSD, and that was simply “you’re hired”.  I believe that’s about 75% of it and we’re working with innovative companies to get more veterans great jobs – but there’s still work to be done to help the brain file and store traumatic memories in a way that they aren’t overpowering.

The below chart is the report I post monthly on social media.  It starkly shows what is happening by era and by sex.  In every graph except the top right, the green color indicates post 9/11 veterans – and it’s virtually always higher. Go on, look for yourself – I’ll wait. 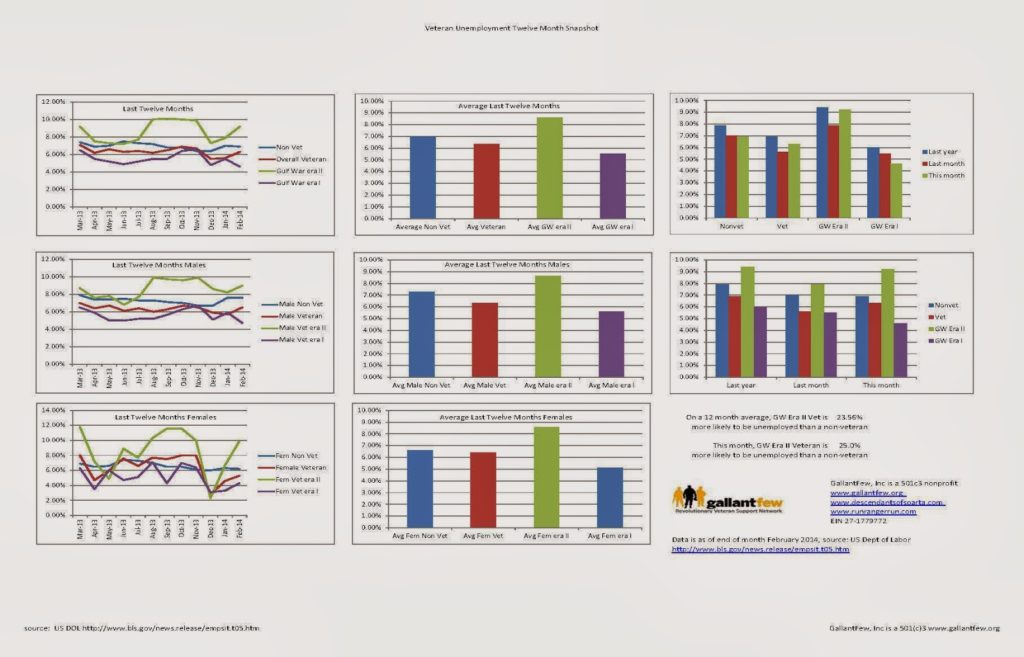 It is also my opinion that federal government will not fix this issue.  It is one that must be addressed at the grass-roots level.  Until communities – local governments, Chambers of Commerce, Rotary Clubs, Kiwanis, faith community – until they take responsibility and ownership for transitioning veterans back into the local community, the problem will continue for long after we leave Afghanistan.   I call on Veterans in every community to come together, show leadership and get your local community – YOUR local community – to take ownership.  It’s going to be hard work, it’s going to take Veterans going eyeball to eyeball with politicians, then eyeball to eyeball with young battle-hardened kids coming back home, you’re going to hear things you don’t want to hear, but you’re going to learn what they need and you’re going to get your community to provide it.  Contact me and I’ll help you get started.

It’s easy to say “I support the troops, I support Veterans”, it’s an entirely different thing to take action and actually do something about it.