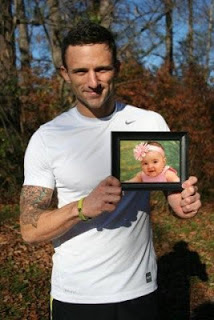 Tweet
Share
Share
Pin
0 Shares
Hey everybody!  My name is Cory Smith and it has been a year since I have been out of
the military.   Also, it has been a year
that I have had the great opportunity of being involved with GallantFew.  When I got out of the military, I decided to run from Fort Benning, GA, to Indianapolis, IN, to help raise awareness about the difficulties that warfighters face when getting out.  The VA now says that 22 warfighters a day commit suicide.  And as veteran Mile Schlitz says, if this was a disease the government would be doing something to combat it.
My main focus of writing a blog is to
illustrate my story, along with the stories of other Veteran’s transitioning from
the military into the civilian world.  My
transition has been anything out of the ordinary.  It has been a year of trials, failures, and
learning how to get back on my feet.  Or
you can go ahead and call it my “crawl, walk, run” of transitioning (except,
there were many times that I tripped and fell on my face).  Along the way, I have been introduced to
individuals that carried me when I couldn’t pick myself up.  Most of these individuals I haven’t even met
face to face.  These people are
game-changers.  Without them I wouldn’t
be where I am today…ALIVE!
Since leaving the military, I am always being asked about progress being made.  No matter how many times I tried to explain myself, people just looked at me with a blank stare.  So, I had to think of a more simple way of putting it, and this is all I could think of:
Well, imagine if you were the visiting team to Yankee Stadium and it is
the top of the ninth, and you are down by a couple runs.  Normally, there are nine players in the
lineup, but your team just consists of you.
You have to not only be at the plate, but also be the base runners, and the
manager giving signals.  Do you swing
away, hold off for another pitch or should you try to advance the runners?  Now, imagine trying to swing a bat and run
around the bases with a two year old girl strapped to your back.
You would think that
a year later I should be coming to a conclusion of the transition side of my
life and be running with the new life.
Sad to say, I thought the same.
And for that reason I have become my own worst enemy.  I guess, to really tell the story of my
transition, I would have to start from the beginning.
Back
in September 2011, while assigned to 3/75 Rgr Rgt in Fort Benning, my marriage had
come to the breaking point leading to separation.  My wife, at the time, decided that it was in
best interest for her and my daughter to move back to the Indianapolis.  So, I helped pack up our possessions and
drove the box truck home to Indy.  It didn’t take long of sitting in an empty apartment, and sleepless nights for me to come
to the decision that I had to get out of the military.  So, in an expedited fashion I entered the
ACAP process (this is the Army’s pat on the back before they kick you out the
door).
ACAP was a joke.  It consisted of me filling out a few papers,
meeting with a resume writing advisor that, obviously, didn’t care too much for
her job.  Actually most of the people
that had to sign my paperwork really didn’t care.  I can remember walking through the halls and
cringing at posters saying, “What Have You Done for a Fort Benning Soldier
Today?”  The only thing I felt that was
being done was wasting my time and gas driving to and from multiple times a
day.  ACAP did offer a few classes that weren’t
mandatory, but I thought could be beneficial.
One of which was a briefing by a VA representative, who gave me so much
information that I wouldn’t know where to begin.  Between all the information sessions, I was
lost and no idea where the starting line was.
But, I didn’t really care.  The
only starting line I was concerned about was the one that would get me off and running
home to my daughter, and nothing was going to stop me.
Tweet
Share
Share
Pin
0 Shares