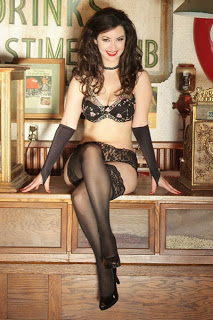 This week I interviewed Ms. Gina Elise, founder and star of Pin Ups for Vets.  Gina is a phenomenal young woman who in true Ranger spirit saw a situation that needed fixing and decided to do something about it.

In 2006, hearing about funding shortfalls in Veterans and Military Hospitals across the country Gina took it upon herself to raise money to help meet that need.  With her UCLA education and friends in the arts community she thought a fun way to raise money would be to sell wall calendars, with photos recreating the 1940’s style pin up models.  Her story is truly remarkable, no less so than when you consider the effect it has on a young wounded soldier when she shows up, in period garb, with her calendar – which she personally autographs and delivers.  She told us about a TBI patient, non-responsive for a month who responded to her when she appeared at his bedside.

Her efforts result in more than just moral support – she has raised more than $50,000, and an example of use of the funds is a donation she made of $15,000 for rehab software and for an environmental control unit (ECU) that enables spinal patients to control their environment and obtain more independence as well as freeing up nurses for other tasks.

Calendars cost $10.  Buy one and donate one to a wounded soldier.  Gina will deliver it personally.

The week prior, I interviewed Ranger veteran and actor Tim Abell.  Here’s more from Tim:  Tim Abell’s Letter from Hollywood.  Tim just joined GallantFew’s advisory board and has already connected us to two great events in California:  The Fred Hall Fishing Lure and Boating Show in Long Beach March 9-12 and Patrick Kilpatrick‘s Hollywood Sporting Clays fund-raiser, June 11.  If you are in the AO, stop in and see us and support these events.

Upcoming guests on blogtalkradio:  Next week is Ms. Candyss Bryant, marketing director for the Best Ranger Competition; and the following week Dr. Rebecca Johnson, with Veterans and Shelter Dogs – Columbia, Missouri.  Dr. Johnson is looking for veterans to participate in the shelter dog project right now – and there is some compensation for participating.

Finally, I just saw this tremendous country music video from Joe Nichols, called The Shape I’m In.  It features two wounded Rangers and is just downright phenomenal.  Watch it!

from the song, The Shape I’m In:


v/r  Karl
PS  Please stop by and leave us a donation so we can reach more veterans with mentors.  Thank you!