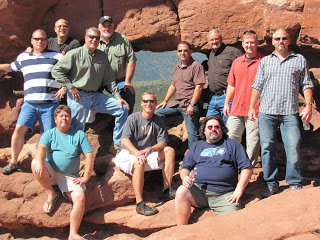 ...”a man who has demonstrated through voluntary and difficult service that he places the welfare of the group ahead of personal advantage” Robert Heinlein, Starship Troopers

Last weekend I had the privilege of reuniting with nearly a dozen soldiers who I commanded in Bravo Company, 5th Battalion 14th Infantry, 25th Infantry Division (Light).  For over a year and a half we shared the steep, red clay gullies of the Kahukus; the razor sharp lava rock fields of Pohakuloa Training Area; the beaches of Waikiki; the chill of Korea; and the scrubby low hills of Arkansas.

It’s been over twenty years since we served together.  Some of us stayed in the Army, many now retired.  One recently returned from Afghanistan where he was the Command Sergeant Major of an Infantry Battalion.  One is a Lieutenant Colonel.  Another left the Army only to return after 9/11.  One invented a better safety strap for a HUMVEE turret gunner and started a successful company providing them to the military.  One is drummer for a rock band.  Each and every one of them talked about how they were forever changed by our time together.

I was struck by the number of times these men told me the influence I had on their lives.  As their company commander, I was responsible for everything from training them for combat to caring for their families – a privilege I have treasured every day since I first touched their guidon.  One of the proudest and saddest moments of my life was when I had to return that guidon to my battalion commander so another could take my place.  My heart swelled with pride again as we stood in a circle, talking into the evening and each one looked me in the eye and said “if we had gone to war together we knew you had prepared us well and we would have been a force to be reckoned with”.

Sometimes the smallest things have a profound effect.  One man told me that he re-enlisted because I sent him on a detail mission – probably a pain in the butt at the time, to load vehicles up at a port.  His life changed when he arrived at the port and realized the Army had boats!  He decided then and there to re-up and loved his subsequent assignment with Army transport ships.  Another remembered how I went to bat for him when he faced punishment before the Battalion Commander for an error in judgement.

There are really no words adequate to explain the bond between combat soldiers.  Although we did not deploy to war, the hardships we shared – the successes we celebrated – we did as a family.  We did as brothers.  Looking around that circle, I didn’t see the gray hair, the extra pounds.  I saw the same young, lean, mean fighters that I led so many years ago.

There are men out there who will never know the closeness of a team such as this – the pride of knowing that you are ready to undertake any mission – no matter how dangerous or difficult, and have the confidence to know you will succeed.  What a privilege to be a part of this few, this happy few, this gallant few.

Last week I had a phone call with an Army veteran.  He served as a military policeman during a different time than I.  He reached out to me as a GallantFew volunteer, because after leaving the Army he went to school, became a CPA, secured a great job and now, some five years later he felt a longing to reconnect.  Although professionally successful, he missed the camaraderie, the closeness of the team of which he had been part.  He looked at how he might be able to connect with veterans and found GallantFew.  To have the opportunity to again be a part of the team, to feel the camaraderie, brought him to us and is the reason why we will be successful in our mission to reduce veteran unemployment, homelessness, and stop the next veteran suicide – and the next…

“…a man who has demonstrated through voluntary and difficult service that he places the welfare of the group ahead of personal advantage”.

I live my life hoping that I’ve made a difference.  I had that rare honor of being told that small actions, some taken unknowingly, made a positive difference in another’s life.  I’ve lived and worked with men that have demonstrated through their actions in terrible circumstances that they love others more than themselves.  Today I thank God for these blessings in my life.

PS.  www.gallantfew.org is moving to a new server this weekend.  There may be periods of interruption and some of the functionality will change.  Also, GallantFew has a renewed partnership with the Kansas Small Business Development Center, helping veterans start or expand small businesses.  For more information, go here:  http://ksbdc.kansas.gov/Pages/militaryveterans.aspx

help us achieve our mission – your donation is tax deductible.